‘Mercury‘ is a film helmed by critically acclaimed director Karthik Subbaraj of ‘Pizza’ and ‘Jigarthanda’ fame. This horror flick stars Prabhudeva in a lead role.

Five hearing-impaired Friends plan a reunion in a Mercury Factory after several years. A mystery force is after them to take revenge. Are they able to escape the trap or not forms rest of the tale.

Nothing much to say about Prabhudeva but his make-up gives a scary feeling. All the five Actors who appeared as friends did a fine job.

Stroryline – 3.6*
Makers promoted ‘Mercury’ as a silent film just because it has no dialogues at all. Not a surprise, Music Director & Cameraman are the real heroes of this project.

Karthik Subbaraj added many elements to make this supernatural thriller engaging but none of them really excite the viewers. He seems to have inspired a lot from Hollywood flick ‘Don’t Breathe’. Plenty of time was taken to introduce the characters and establish the plot. Even the audience couldn’t connect to the sign language of hearing-impaired friends. Though the plot is interesting, Karthik Subbaraj falters in the execution. 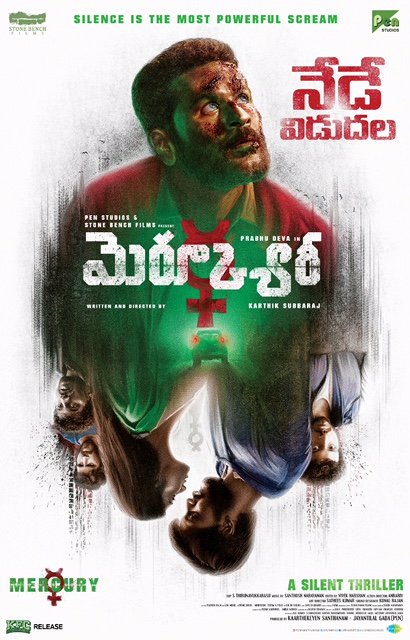