Blackmail is one of those eerie films that stays with you long after its gone because there is a genuine effort to make the plot a hero in this case. So plot-heavy, despite its snail pace, the film works in parts.

So what happens when a middle-class man decides to sprinkle some spice in his married life, goes home early from work after stealing a bouquet of red roses from a graveyard? Through a peephole hiding at the back of a salt barni, he gets a rude shock – his wife in bed with another man. But instead of confronting the lover and her, he picks up his coat and walks off, only to follow him to his plush bungalow. Instead of taking this up with his wife, he falls prey to quintessential middle-class issues – loans, credit card payments and EMI. So what happens of badla? That ensues, in a gory enough way, but there’s a fresh spin to it. Ay!

This is one of those eerie films that stays with you long after its gone because there is a genuine effort to make the plot a hero in this case. So plot-heavy, despite its snail pace, the film works in parts. Parveez Sheikh (who’s written Queen and Bajrangi Bhaijaan) creates a tapestry of black humor, uproarious situations but the tragedy is never lost on anyone. You feel that pang for all the characters especially the one who drives the masterplan – Dev, played with precision by Irrfan Khan. So there’s deadpan, poker face that ups the laughs. There’s a finely written long-standing scene in the film where Dev keeps stealing pics of his colleagues’ wives to use them as a muse in the men’s washroom. Yikes? Oh well, far from it. We will treat you if you don’t laugh at that gag. Everyone else in the cast is adequate – be it Arunoday Singh as the henpecked husband to the dominating and rich Divya Dutta or Kirti Kulhari as the wife living in guilt, throwing herself away for a few minutes of passion. However, it would’ve been nice to know what prompted her into adultery – my best guess is boredom coupled with the return of her ex but that’s never elucidated in the story. The best bits are with Praduman Singh and one has to watch the film to know what happens to him.

But that doesn’t take away from how wicked the film is. That and how well directed it is. Abhinay Deo who never hits a false note. Even when his plot falls weak, his conviction doesn’t which is what sells the story to you. His concoction here is heady and indulgent, compelling and confusing but overall the plot works. More because of Irrfan who has such a charming appeal. He is infallible in every frame and the last scene just nails it. I would dare to describe it as a novel and sexy film.It

is not laugh out loud slapstick but it’s genuinely a funny watch. And how often does that come along?
#BLACKMAIL

Negatives : Some contrivances in story especially after Intermission , Inconsistent editing ! 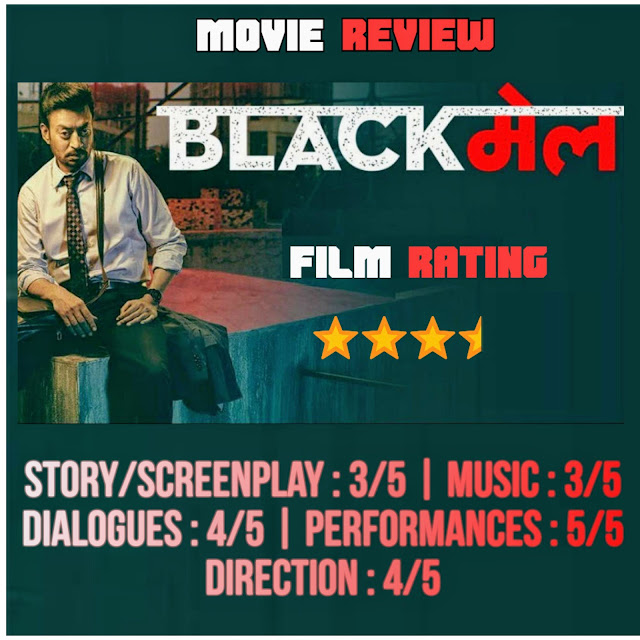